An Apple-Themed Takover in the Ithaca Commons 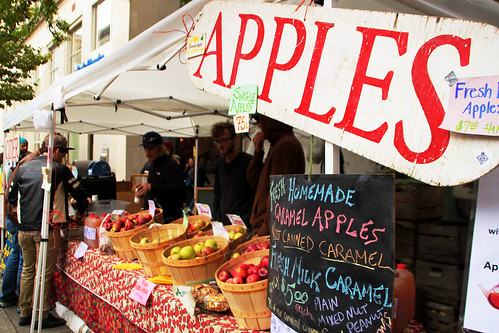 A stand at the 30th Annual Apple Fest; via Flickr, Hannah MacLean

The air for most of weekend was as crisp as apples as attendees waiting in lines wrapping around buildings to get their hands on the coveted apple cider donuts. Once out of the line and armed with a box or two of fresh goodies, people milled about to various vendor tables that stretched from State to Seneca St.

From October 2nd to the 5th, Ithaca residents enjoyed a wealth of apple themed events, creations, and activities as apart of the Commons annual Apple Fest, hosted by the Tompkins Trust Company.

Despite a dour day on Saturday, the crowds persevered. “It rained a lot on Saturday, but my friends and I just grabbed some hot cider and browsed the shops whenever it was too rainy to be outside; then we went back the next day to check out the outdoor booths we missed,” said one attendee and Ithaca College student.

Attendees were delighted with performances on Saturday and Sunday from local acts such as IC Voicestream, Sunny Weather, and Namarah, along with ten other acts at the Bernie Milton Pavilion, and the Wassa Pan Afrika Dance Ensemble and five others inside at the State Theatre. Representatives from two local radio stations, 91.7 WICB and 93.3 ROCK, each had their own tables set up, giving away free swag and promoting upcoming station events.

Patrons could also buy a variety of products from local and international vendors, ranging from apples and apple-based products, to jewelry, clothing, decorations, and even houseplants.

There also was an incredible variety of food venders present. Some featured local restaurants, such as Taste of Thai and Ithaca Hummus, while others fully embraced the event’s theme. They offered varieties of apples, apple cider, hard cider, caramel and candy apples, traditional apple pie, and even an incredible apple pizza.

For some out of state students, the weekend was their first taste of seasonal activities. “Back home, it never gets below fifty degrees,” notes one freshman from Tallahassee, Florida. “It’s been so awesome to experience real fall weather and and get to go to cute, eclectic fairs like this.”

For more of the highlights from this year’s Apple Fest, check out a recap in the Ithaca Journal