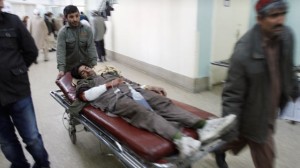 On Wednesday, Afghanistan protestors became violent and outraged as they found the charred remains of the Quran, the holy book for Muslims. Protestors have set fire to six fuel trucks and started chanting “Death to America” despite apologizes from the top U.S. Commander, General John Allen.

At least seven people have died and dozens are wounded  so far as protestors continue to try and push out American forces and their president, Hamid Karzai. The U.S. Embassy in Kabul, which holds many police, coalition military forces, and foreign contractors, is still currently under lockdown and most of the staff have been asked to stay because of the threat the protestors have on the Embassy.

Four copies of the Quran were burned before General John Allen halted the process, saying it was “mistakenly sent to be incinerated”. He immediately telephoned president Hamid Karzai and the major media organizations to issue a public apology.

“This is not the first time they’re doing these things. They are killing civilians and taking photos of them. Every day they kill civilians with airstrikes. We can’t accept their crimes in our country,” Mohammad Shaker told ABC News.

The mistake came from military officials who thought the books had “extremist inscriptions”. These books were collected from the detention center and were accidentally given to troops for burning.

Hamid Karzai is urging his citizens to remain calm and wait for an investigation. Despite numerous apologies from the White House and Deputy Defense Secretary Ash Carter, Karzai still believes this could have been avoided.”The sooner you transfer the prison, the sooner you will be able to avoid such problems and unfortunate incidents,” Karzai told Carter.

However America is working on making sure this never happens again. Allen, the coalition commander, has issued that all forces in Afghanistan will go through training to identify religious material.